It is so stinkin' hot outside, and I have a cold.
I saw the Nanny Diaries last night. With Jen. Melanie didn't come because it was the 10th anniversay of Princess Diana's death. Or maybe it was Joe and Melanie's 10th wedding anniversary? Whatever. Where are her priorities? I'll say it was worth it to watch the beautiful clothes and the amazing 5th Avenue apartment. I was confused at the end because I think they changed it significantly from the book. It has been a long time, though, and I don't really recall.

They are perfectly welcome to change it, it certainly isn't great literature. Near the beginning I was distracted from the plot by Scarlett Johannson's banana clip!? Where do you even find that? Ebay?

I have changed my mind. I am ready to talk about the romances in my past. Just books, not boyfriends. Trust me, the books are more interesting. Stephanie Meyer's vampire romance novel, Twilight, has more sexual tension in its 400 pages than the sum of my hot-single-girl-about-town years. I don't think I am alone. What else can account can account for the bestseller status? I'll be honest. I read the first one almost without pause. I think her greatest skill is in writing romance without graphic sex. That must be hard to do, otherwise there would be more of it, eh? The writing is good enough it doesn't get in the way of the plot. I'll recommend it, because it is a fun, take it on your overseas flight sort of read. The second book, New Moon, was not as good as the first. Eclipse, the third, and last(?) book is out, but I haven't yet read it. Has anyone read it? Care to lend it to me?
Twilight: 7
New Moon: 6
Eclipse: I'll let you know

Pack meeting on Tuesday was a lively affair. Ross is a Wolf Cub Scout, and like other little boys, loves Pack meeting for all the patches and other dingleberries he receives that I get to sew/stick on his 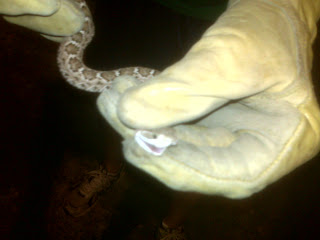 uniform. Treats were served on the south lawn of the Church building, and after a little socializing and foot racing it was time to go home. Unfortunately, Ross and few other Wolves, Bears, and Webelos were on the north side of the Church, playing with a baby rattlesnake. Are you kidding me?! The snake was redeposited in the desert by Brother Brooks and his leather gloves, no one had to go to the hospital, and Ross pronounced the whole scene "wicked awesome."
Posted by Beeswax at 9:19 AM 1 comment:

A New Start: of Books and Babies

SOOOO, Jake's last post was in December 2006. I think I might take a shot. I thought that perhaps this would be a good forum for my book journal. I try to write a few sentences about every book I read, and rate it on a ten point scale. That way I don't forget I read it, and buy it all over again. I started this quite awhile ago, and if I find I have scads of extra time (because I am avoiding the gym), maybe I'll list old books. For now, though, I look to the future...

Or, not. My current read is "The Great Mortality" by John Kelly. It is a history of the Black Plague, and though quite interesting, not nearly as good as my favorite disease history (oh, my, I AM a nerd!) "The Speckled Monster" about Smallpox.

My favorite part thus far is the description of the human cesspool in medieval cities. In Paris, several street names were inspired by merde, the French word for "poo," only not so nice. There were rue Merdeux, rue Merdelet, rue Merdusson, rue des merdons, and rue Merdiere- as well as a rue de Pipi. Awesome. My kids loved this part, too. I think bathroom humor(or really chamberpot humor, since the whole problem was a lack of plumbing) is pretty funny. Freud would have a field day with me.
The Speckled Monster: 9
The Great Mortality: I'll let you know

I am leading the discussion for Sense and Sensibility in book club next month. I haven't reread it yet. I also wanted to discuss the characters in the Becoming Jane movie, in relation to her books. I think the love interest in the movie is more Mr. Willoughby than Mr. Darcy, and probably just about as fictional. Any comments?
Oh, and Jane Austen books don't need ratings; just go read them.

My baby Tommy is 15 month old, y muy peligroso. Today he learned to scale the mountain of clothes next to the washer, climb the washer, and get to everything we put on the dryer to keep safe from Tommy (keys, my purse, etc.). My sister Jen said I should just wash the mountain of clothes, but I have more important things to do like read books about the plague and write about them on Jake's blog.

Sam doesn't have preschool today, and he is ticked. This morning he asked me:
"Mom, if you need to go somewhere and do stuff, can you drop me off somewhere?"
"Like where, Sam?" I replied.
"Oh, I dunno, Mom. Anywhere is good."
"Sam, if there was anywhere I could drop you off, don't you think I would?"

Actually, though, we are having a good day. When Tom wakes up from his nap, we might tame Sammy's fro and go out on the town. We are out of milk. Tonight Jen and Melanie and I are going to see The Nanny Diaries over to the Harkins at 6:55. You are all invited. (Only, no one is reading this, since we haven't posted in 9 months).