Training for Italian Marathon, Anne Taylor the pants genius, slip and fall, giving up on the Twelve Caesars, shoes and a neck pillow

So when I got off my treadmill the other night, I announced to Jake: three and a half miles tonight! I am going to be ready for the Italian Marathon. (The Italian marathon includes walking from an enormous Church full of famous dead people and Renaissance art to a pizza place to a museum full of marble nekkid people, to a gelateria, to a big pile of rocks that used to be something really important to a some fellas named Caesar, then taking a taxi to dinner. My apologies to the real Italian marathon, if there is one, and its actual athletes).

So Jake said: great, now get up and do it again at 3 a.m., and it will feel just like Venice.

I'm sure midnight treadmill riding in Phoenix is nothing like Venice. In Venice I plan to ride around in boats while I eat my pizza and ice cream, reclining lazily on crushed velvet cushions. I don't know if there are really any velvet cushions; maybe I've watched too many movies about the 19th Century Grand Tour. Now that I think about it, there might not be any parasols around, either. The good news: I won't have to get my lady's maid to loosen my stays after the pizza and gelato binge. I've bought myself some large and stretchy pants! (Anne Taylor Loft has got a size 12 that will accommodate a slim sumo wrestler. Are even bigger than Banana Republic.)

Moral of this paragraph: You can learn a lot from your Baedeker's,

but you can also learn a lot from Nacho. 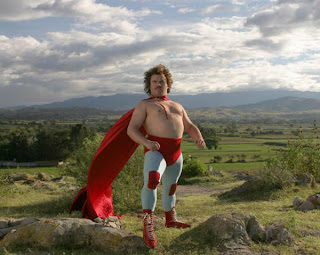 So, about a month ago I sprained my ankle.

I was skiing in Switzerland. Totally not embarrassing.

Or, maybe I slipped in the shower, old lady style. As I lay there on the shower floor (shower is weird design that is huge like football locker room, so there is plenty of room for sprawling) and stared up at the etched glass windows with the desert scenes which I hate, but do not include howling coyotes or kachinas, which I could not tolerate, I thought, it has really happened! I've fallen and I can't get up! And I'm soggy, and naked, and already bruising in so many odd and painful places! But after a cursory inspection, I found both my hips still firmly in their sockets, and my head not cracked open.

Anyway, so I've been babying the ankle and wearing flat shoes to Church (a real hardship), and when I got on the treadmill the other night, I was afraid I'd mince along for like 15 minutes, then fling myself on to the nearby bed, apply ice and pant for 30 minutes more. But I didn't. Is good news.

Okay, so my Italy reading list might be a little ambitious. I started reading the Lives of the Caesars with Tiberius. I don't think it is the beginning, but he did have to divorce his pregnant wife, who he liked, and marry Augustus' daughter, who was a real tramp, and maybe a shrew. So that was sad and interesting. But I'm not sure I'm really getting the big picture. Might need to read faster, and skim all the parts where they fight the Germanic tribes or murder fellow Senate members.

I also read a Rick Steves' Europe 101: History and Art for the Traveler book I found at D.I. It is from 1985, so it is probly a first edition and worth like ten grand. So it's old, but filled with timeless jokes like this one, about the dawning of the Renaissance, and the labor shortages created by the plague: "Serf's up!"

So hotels are reserved, train tickets bought, and even booked us our own guides at the Vatican and Colosseum/Forum/Palatine Hill. One nice thing about traveling with seven people is getting your own guide is nearly economical. I made us reservations to see the Uffizi and David in Florence. I've got my eye on a social history walking tour about medieval Florentines. But my Dad's got his eye on another about banking and the Medicis, so there might be a walking tour standoff. (I foresee this will end with me and my Dad going to see the bankers, and everyone else going shopping.)

I bought a suitcase and some packing cubes. I know Inkmom recommended the MLC Patagonia, but this one spoke to me (with its cheap price tag). It is the Ebags Mother Lode TLS Weekender Convertible. I bought black, to be practical, even though I really wanted green. 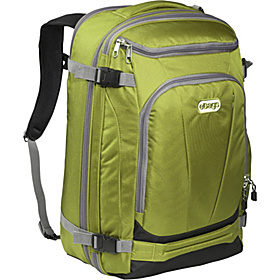 And finally, my friend and travel guru, Kari, who goes all over the world, but never blogs about it, told me that my Joseph Seibel walking shoes (black, but with some tasteful velcro) would not be acceptable in Italy. That Italian women wear stilettos to the toilet in the middle of the night (she might not have said this), so I was going to have to step it up. So I got these, and Kari approved them:

So anyhow, one Lewis 'n Clark brand original neck pillow (was famous neck pillow they took with them to explore and map the American West), and a few free Italian phrase apps for my ipad (My kids keep yelling things at me in Italian, and they all sound like come-ons, so they must be doing it right), and that's it. I'm ready.

Except for my house.
And my laundry.

I should go do that.
Instead of blogging.

Any last words of advice?
Posted by Beeswax at 11:38 AM 3 comments:

I just made my first Listmania list. I don't think I'm going to get through it before I leave for Italy. (Especially if I start with The History of the Decline and Fall of the Roman Empire, in six volumes.) You have anything I should add? Or detract?

(This is what I do instead of booking hotel rooms. )