Why am I blogging at midnight? My kids will be up soon and want me to make them cinnamon toast on white bread that we don't have.

Hi there. School is out. Which is good. I'm not complaining. But I am very tired. I need more stamina. I think I can achieve this by eating more chocolate covered bananas and zucchini-banana-coconut bread made out of our baseball-bat-sized zucchini.

I think I need to go to Fry's and buy more bananas.

Sam's teacher decided to have a science fair the last week of school, so we baked cookies on the dashboard of my 91 Integra. It was nearly 250 in there. 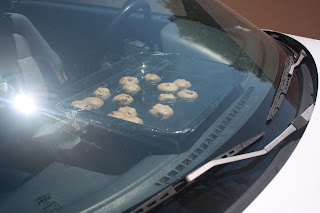 We burned the second batch. Even so, he won the science fair! And the language arts award for his class. 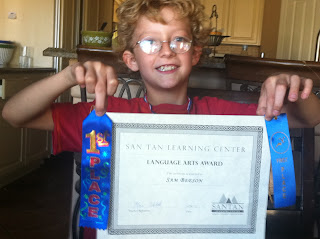 Ross was named 7th grade student of the year for his class. This was also surprising, considering the smarty-pants school he attends. But not totally shocking, as everywhere Ross goes, people seem to chuck blue ribbons and crystal apples and assorted plaques at him. 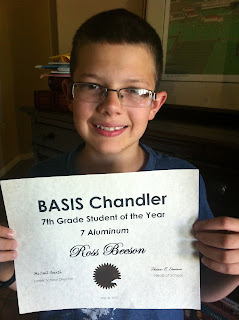 He also designed a catapult with a few of his friends for his term project: 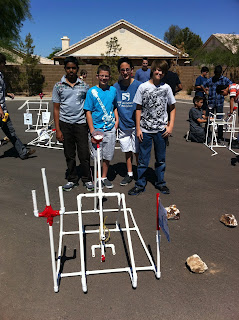 It was designed to launch fruits, veggies, or tennis balls. It was pretty much the best thing that happened in school all year.

Jane finished out the year with an A average, and Tommy graduated from Kindergarten. It almost didn't happen, because at the last moment, he freaked out and wouldn't put on his cap and gown. We still aren't totally clear on what happened, but we think he decided he wasn't wearing a dress. Once he saw all the other boys wearing their own dresses, he came around. 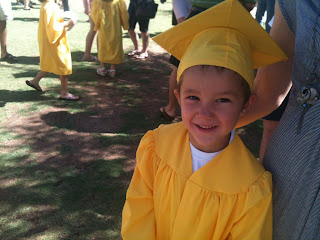 So now, there is nothing to do but swim, play Minecraft, try out new chore schemes I read about in parenting books, and watch YouTube.

Yes, I bought it on itunes.
Enjoy.