No, I'm lying to ya. Movers are coming Wednesday for furniture, but in the meantime I'm supposed to be packing all our doo-dads and what-nots into boxes. Meantime= this very moment. But obviously, I'm not doing it. I did, however, (with the help of Jake's Mom and sister), pack up and move my whole kitchen over on Saturday. So that means I can't cook anything even if I really super-duper desired it. (Sigh of relief.)
In other news, had my ultrasound this morning, and our fetus has himself a willy! And since my boys are wild and loud enough for 2 normal boys each, that means I'll have the equivalent of 8 regular boys (seriously, those of you who have met Ross, Sam and Tom can bear testimony of the crazy in the comments section) that will all live at my house. Plus Jane, who isn't going to be at all pleased with the news, when she gets home from school and I am forced to tell her. There is sure to be a weep, wail, and gnash of some duration, before it works its way into a sour-faced mope. (She's enough drama for 3 average girls.)
Anyhow, little Willy (temporary endearment) looks fine and healthy, if a bit alien, gray, and grainy, which is fab news. Now if only I could stop eating 4 breakfasts, 3 lunches and 2 dinners (plus snack before bed) (oh, and all the ice cream treats), perhaps I could keep this whole thing under 200 pounds?
Reach for the stars, Beeswax.
Posted by Beeswax at 12:32 PM 18 comments:

The really super long one, in which I ride a bus across the northeast, part 1

Well, now. I'm back. I've been on a bus for a week. With Jake and Ross and my family, and lots of old people. Really super nice ones with awesome sweet spirits. From Utah. At first, I was all judgy. Like: Wow, these fogies are going to slow me down. It turns out, though, they were surprisingly spry, whereas I, in my current, 4 months pregnant condition, was...not. I mean, I kept up. Sorta. But the May 2007 Kelly, who ran about the streets of Paris all night, all super (okay, medium) skinny and bendy and hot, is gone. October 2009 Kelly was just working hard not to throw up on the bus. She also liked to complain that her sweats were too tight. Which, if you think about it too long, is way sad. So don't think about it. That's what I try to do. But it is hard not to think about when your elastic waistband is digging into your belly.
My Mom seemed more stressed than anybody that we were on the geriatric tour. See, when she was 20 she worked in an art shop in Rothenburg, Germany, and every day the buses would pull up into the center of that darling medieval, walled town, and aged Americans would waddle off, yelling stuff to each other like "Herbert, what country is this again?," then come into the art shop, where my Mom would offer them some free schnapps, and the southerners would tell each other "well, she talks good English, but she shore has a funny accent!"
Mom's from Sacramento.
I won't tell you about the time she offered booze to a general authority. She was like, "want some schnapps?," even though that guy was putting off some serious Utah vibes and she didn't want to ask, but her boss yelled at her or something. And when she did, the GA (I think it was Hartman Rector or Hugh B. Brown) put his arm around her and said "No, thank you, Sister Taylor. But I'd like to invite you to a special Sacrament meeting." If I told you all that, I'd be getting off the subject. Which I never do.
I didn't have such bad feelings about bus tours. We rode all over England in one while I was on study abroad, and plus, spending the last three months with my cheek resting on the toilet seat has humbled me. I am low on pride right now. 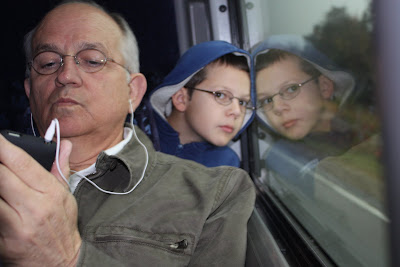 (Little) Ross LOVED the bus. He spent most of his time in the very back seat, which had no window and was next to the toilet, reading his books and borrowing people's iphones, so he could download violent shooting games he's not allowed to play at home. Here he's got his eye on Grandpa's, but Grandpa is busy, probably listening to something good like Simon and Garfunkel. Simon and Garfunkel is very good for long bus rides around the northeast.
Anyhow, our tour began with the sites of Boston. A walk through the North End to the Old North Church, Bunker Hill Monument (climbed halfway up before I asked myself what I was trying to prove, although felt sort of sheepish as athletic elderly persons jogged by me to the top.) 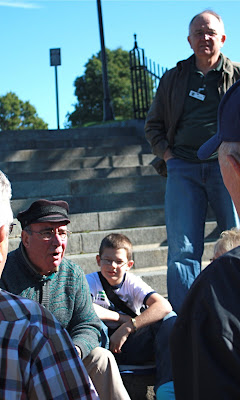 Ross was totally tour guide's pet, following Joseph around all day. I won't put his last name in here, in case I decide to tell you about all his inappropriate racial and political comments, which caused my sister Jen to whisper "that really just happened" like every 20 minutes all day. (I learned about not including last names when I wrote a post about going on a date with Rendell L. to El Charro in 1992, and then he googled himself, and emailed me about where to find better enchiladas. Which was kinda cool, but also kind of mortifying.) Anyhow, that's Grandpa Ross behind them, in the photo. Maybe he wishes he was tour guide's pet, too, but probly not. Joseph liked to get right up in your business. 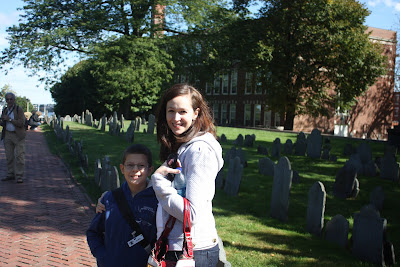 That's me and Ross in the cemetery just up the hill form the Old North Church. Oh, boy. I totally look pregnant. And here I thought I was fooling everyone with my Juicy sweatshirt that wouldn't zip closed.
Had lunch at Quincy Market, which has got to be world's best food court. Had some clam chowder, fried shrimp, and mind-blowing gelato (nutella and pistachio). Rode around Boston, checking stuff out. 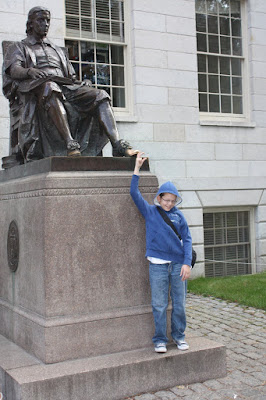 Ross rubbed the toe of John Harvard, which apparently means he'll never have to study again , or gets him into Harvard automatically, or some such thing.
Drove out to Lexington and Concord. I'd like to spend a weekend there, checking out all the Transcendentalist digs. Or maybe I'd like to move there. Am still unsure. 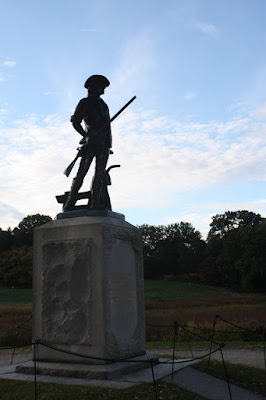 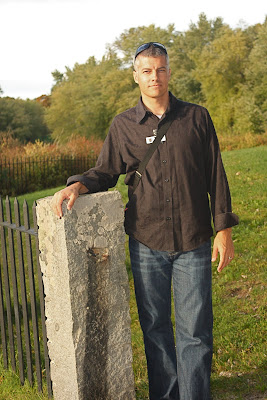 Dear Concord Tourism Council,
You can totally use images of my husband, Jake, free of charge, to lure ladies to your lovely town.
What? No. He won't pose in a speedo in front of Louisa May Alcott's house.
Sincerely, Beeswax 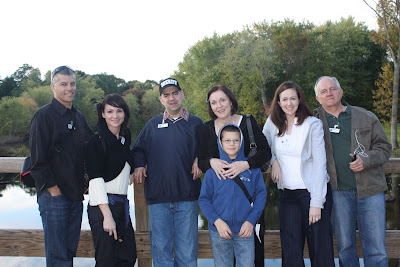 The whole group, on a bridge over a river. (What state are we in, Herbert?) Jake, Jen, Ryan, Mom (Mareen), Ross, me, and Dad (Ross). We were about to get on the bus to go eat horrible fish at a place called the No Name Fish Market. Blech.
The next day, we were on the road to New Hampshire.
You know Michael's? The craft store? Well, before our bus began to work its way across the great state of New Hampshire, my only real experience with fall foliage (except a little in Provo. I guess I didn't spend enough time making out with boys up in the canyon, where the real excitement, er color, is. That's what my Mom says, anyhow. You know, it is hard sometimes to be nerdier than your mom.) was in the silk flower section of Michael's.  And the colors always looked false, and a little garish, to this California-turned-Arizona girl. Sure, there is usually some wise guy in Leisure (Seizure) World who tucks some red silk maple leaves into the armpits of the Saguaro cactus in front of his double-wide (or, you know, spray paints his front yard gravel green, to look like grass, which it doesn't), but it is always in poor taste. But the real thing? Not at all tacky. 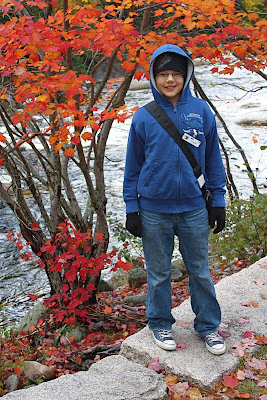 Makes me wonder again what I am doing out here in the desert.
More next time on how we missed President Monson (in Kirtland), and Pam and Jim's wedding (on Maid of the Mist), by only one stinking day! Plus, as a bonus, sister Jen's fascination with octogenarian honeymooners!
Posted by Beeswax at 8:32 AM 12 comments: