Melanie talks to her wedding photo and tries to explain her current lifestyle to the girl in the white dress. She's pretty sure 'Wedding Melanie' doesn't understand why many things have, of necessity, been cast aside in 2007 Melanie's life. Things like eye makeup. I don't often talk to my past self, but I sometimes snicker at what 'Single Kelly' would make of all this. She had a very narrow perspective and was judgmental and intolerant (more than now). Looking back, I'm not entirely sure what she expected out of life. Maybe a Master's Degree, or, in leiu of that, a skinny hiney. Really, though, I've got it good. Much better than whatever Single, Small-minded Kelly had planned for me.

When my roommate from the UofA was getting married (I was about 21), she gave me the name of a lady who would sew the bridesmaid dress for me. This is how Single Kelly remembers it: We went to this seedy apartment way out in the sticks. We knocked on the door, but no one answered it because they couldn't hear us over the baby screaming. We were finally ushered inside the tiny, cramped, dirty, loud space. It smelled like the soggy cheerios that still sat on the table, even in the early afternoon. Something smelled sweet, too, like part-licked lollipops, and the smell grew stronger the longer we sat on the couch. There were about 6 children, between them wearing enough to fully clothe one child. One small boy was wearing a pair of faded character underpants, and since the elastic had given up entirely, they were rigged up with a safety pin. The safety pin had come undone, and the child stayed dressed only by holding up a wad of fabric with his left hand. Another child with sticky hands and face and a horribly saggy diaper was screaming for her mama, so Mama dropped her behind a baby gate and let her scream while she took my measurements. (36-24-36, of course.)

I was horrified by the scene. I was judging the heck out of that poor lady, and I'm probably going straight to Hell over it. The image of the boy in the underpants is still burned into my brain.

Looking back now, I see the scene in a new light. First of all, the apartment was at Power and Williams Field. Even now, that is still not a metropolitan center, but the poor woman wasn't a pioneer out there, homesteading her 100 acres. It wasn't seedy, just not new. Second of all, she was having a bad morning. Dishes weren't done, kids weren't dressed, nobody was napping (how could they, in the 400 square feet she lived in?). Plus, I think there couldn't have been more than 4 kids total.

As for the little boy in the underpants: I now have great respect for him. He had enough modesty to hold up those underpants all through our visit. During his potty training, Ross would strip naked when the doorbell rang, so he could run to the door and flash the visitors before we caught him. Instead of a "Return with Honor" sign above our front door, we need one that reminds us that "Underpants are the minimum standard." (Maybe one of you crafty ladies can make me one with your stickers and painted wood.) I'll tell you this, though. If any elastic in this house shows any sign of weakness, it goes in the trash, immediately. No safety pins. No questions asked.

Around age 20 I had a blind date with a boy named Brigham. Before I met all the wonderful Beeson Brighams (Hi big Brigham! Hi little Brigham!), I put this name in the same category as the name Nephi or Zerubabel. (I was also very judgmental about names. I might still be, but now I like Brigham.) First he took me to a Disney movie, then we went to dinner and had to analyze the Disney movie and compare it to all other Disney movies. Then he asked me what sort of "Wife Car" I would like to drive. I was done with this joker. "That one," I said as I pointed. To a Porsche. He didn't get it. "Where will you put all the kids?" he queried, very seriously. I told him, "In the trunk."

So I look back at Single Kelly, and I think, hey, I've come a long way. It sure would be fun to mess with her a little. I wish I could send November 1992 Kelly a letter to her dorm from 15 years in the future (today). A bit like how Dwight gets messages from future Dwight. (Only really his are from Jim). I think I would send her this picture: 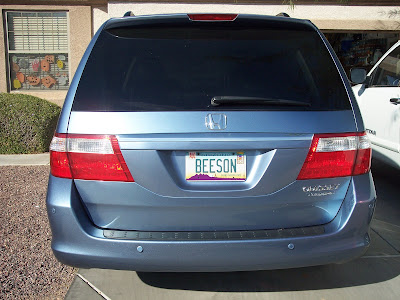 The caption would read: Dear Kelly, this is what you drive in 2007. P.S. You like it, and you have four kids to go in it. Love, Future Kelly

Single Kelly will be so freaked out! Married to Jake! (It will be a shock to learn her future spouse's name on a vanity plate, but 19-year-old Kelly already thinks Jake is pretty cute. She has known him about 6 months in November '92). She is horrified by the mini-van. Not even its automatic lift gate, black leather seats, or sunroof can turn her head. (There is no place to plug in my Ipod, but Single Kelly doesn't know about Ipods, so she wouldn't be glum about that). 1992 Kelly wouldn't be impressed, even with all these features. 2007 Kelly is, though. She thinks it is a mighty fine Wife Car.

good post. I think my "wife/mommy car will be some sort of wagon...volvo wagons are sweet. and it would be nice to have a letter from 2022 Lizzie to know that I have a husband and some kiddos.

Again, you need to write a book! You've got talent. You think they will ever have a reality show for people who can write?

Is that a car for a fine wife, or a car fine for a wife?

I think it's both, a fine car for a fine wife! :) Am I allowed to say that without raising eyebrows?

Kelly, you have got to write a book. And I will buy it. And I will also buy it for all of my friends. Seriously, you're hilarious. And I agree that once the elastic goes, the undies should go as well. I might cross stitch something for you...

Wedding Melanie, too, is appalled. But real-life Melanie... she's mighty impressed by what you've made of yourself. No real surprise -- I've always looked up to Cousin' Kel.

That's my #1 choice for Wife Car! I'm going to post a pic of mine on my blog--it doesn't get enough credit...

Um, that last post was me. I was signed into my improv troupe's g-mail...